PRA is a heritable disease that causes blindness in dogs. There are a few different types of PRA that can affect a number of breeds - most commonly  affected include Labradors, Poodles, Cocker Spaniels and Australian Cattle Dogs. Most other breeds have been reported to have instances of PRA and it is  important to understand that cross bred dogs can also be affected with PRA.

The most common version of PRA found in lappies is Progressive Cone Rod Degeneration type (prcd-PRA), which is a late onset version of PRA where the eyesight of affected animals starts to deteriorate around the age of five, although the age of onset can vary from one to eight years of age.

This type of PRA is often first noticed as a loss of night vision, then a loss of vision in all types of lighting. In the early stages there may be an unusual greenish reflection in the animal's eyes in low light conditions. The actual  loss of sight will then occur over a relatively short period of time, usually resulting in total blindness.

The disease is inherited via a simple autosomal recessive gene which means that an affected lappie will have two copies of the faulty gene in order to suffer from the disease. As the disease is recessive, the clear gene will override the faulty gene and they eyesight will remain normal.  As such, the parents and offspring of any affected animal will be carriers even if not affected themselves.  A carrier of prcd-PRA will have one normal gene, and one faulty gene.

Genetic testing can determine if a dog is clear of prcd-PRA, a carrier of the disease, or even affeted (if not showing symptoms yet). In Australia to date there have been no recorded cases of prcd-PRA in Finnish Lapphunds, and while breeding from a carrier to a clear dog is permitted, the breeding of a carrier to another carrier is not recommended under Victorian Code of Practice (under the Prevention of Cruelty to Animals Act 1986) as this will have a chance of producing puppies that will be affected by prcd-PRA.

The Legislation also states that progeny that has come from a pairing that includes a parent who is a carrier of the PRA gene should be tested, as it is likely that a number of the offspring a carrier will also be carriers. However, progeny from two clear parents will also be clear.

When buying a Lappie puppy, you should always ask your breeder as to the PRA status of your puppy's parents; if one is a carrier your pup will also be screened to find out if it is a carrier or clear of the faulty gene. It is important to note that carrier status does not mean that the puppy will be affected by PRA; it is in the offspring of two carriers that the disease is likely to emerge.

The table below shows the inheritance of prcd-PRA for the different status. 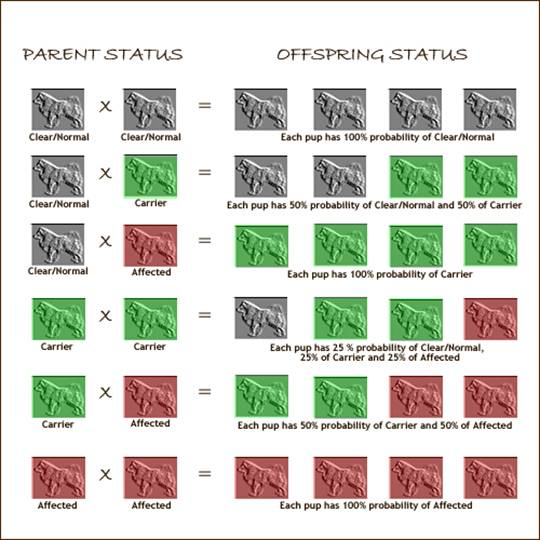 If, for whatever reason, a breeder refuses to screen puppies from a carrier litter, or tells you that it doesn't matter, we would NOT recommend that you purchase a puppy from them.