Canine Hip Dysplasia (CHD) occurs in most breeds of dogs (including mixed breeds) and can result in debilitating orthopaedic disease of the hip. A dog that has hip dysplasia is said to be dysplastic and has hip joints that are not formed perfectly (caused when the femoral head does not fit properly in the hip socket), which causes instability of the joint. Over time, this malformation can cause degenerative joint disease, resulting in increased pain and immobility.

CHD is a common canine inherited condition that is not apparent at birth, and any imperfection can be slight or severe. A dysplastic dog may experience no pain or problems from its condition or it may experience mild to severe discomfort when moving.

Although CHD is not common in Lappies it does contain an inheritable component and as such hip and elbow scoring is done before breeding in order to ensure that the hips and elbows are in good condition.

What are Hip Scores?

A hip score is a numerical score that is generated by scoring different physical aspects of the hip joint and adding these values together.  Generally, the lower the score the better, although numbers vary in different countries as different assessment systems are used.

In Australia, the system used to grade hips scores is know as the BVA/KC (this system is also used in Britain, Ireland, and New Zealand). The process scores each hip joint based on the severity of changes of 9 specific features of the joint (known as morphological radiographic criteria). Each joint element (criterion) is scored from 0 (ideal) to 6 (worst). These different elements are added together and the final hip score is calculated as the sum between 0 and 53 for each hip joint, and then as an overall sum of both hips (0-106).  To illustrate,  a score of 2/3 (2 in one hip and 3 in the other) will be an overall score of 5. In Finnish Lapphunds, the breed average is 12 - 13.

The figures below give a visual representation of the different variations in hip-joint placement. The table below gives the international equivalents.

It should be noted that CHD is not only an inherited condition and that other factors such as feeding, exercise and environment, including over exercise at an early age, may play a part in the development of the condition.  We also do not recommend that Lappie puppies undertake rigourous physical activity (eg Agility) until they are over 18 months old. 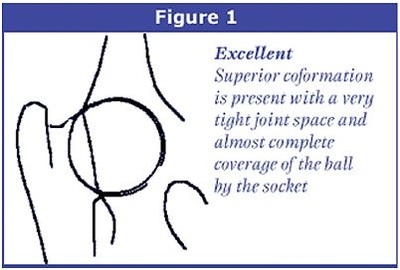 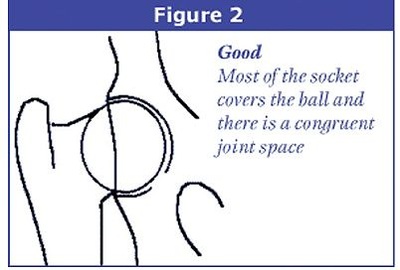 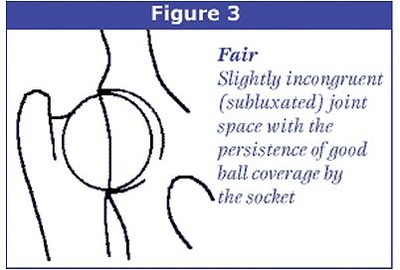 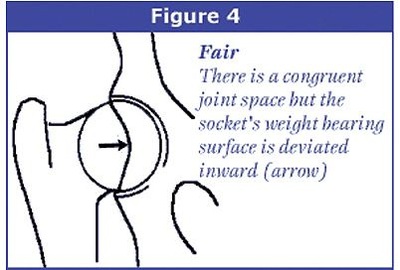 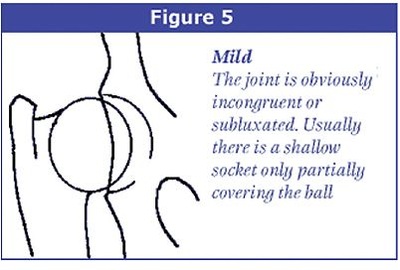 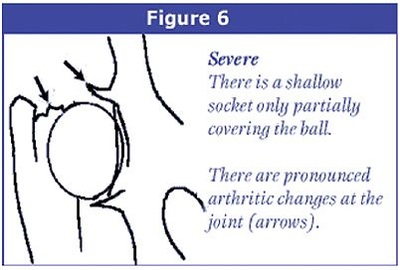 The above figures show the most common form of abnormality that occurs with differing degrees of hip dysplasia.
​ 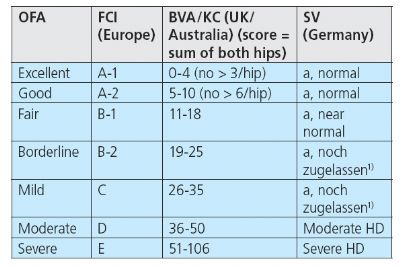