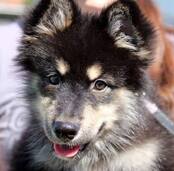 ﻿The Finnish Lapphund is an ancient breed. Its spitz type forebears were used by the semi-nomadic people known as the Sami in the role of ‘helper’ dogs.  Over hundreds of years, the Sami people adopted a more sedentary culture, which revolved around the keeping of reindeer herds. During this time, the role of their dogs evolved from hunting and protection to herding reindeer and watching over stock.   The first standard of the breed was established by the Finnish Kennel Club in 1945 and was known as the Lapponian Shepherd Dog. This standard included both longer and shorter coated dogs.

In 1967 these two types of Lapponian Shepherd dogs were separated; the longer coat dogs were given a separate standard and were call Lapinkoira (Lapphund) the shorter coated dogs became known as Lapinporokoira (Lapponian Herder). In the 1970s the type and overall appearance of the breed became fixed and the standard was revised to reflect these changes. The breed name was again changed to Finnish Lapphund in 1993. The standard was revised in Finland in 1996 and an English translation was accepted by the Federation Cynologique Internationale in 1999.

A breed standard is the guideline which describes the ideal characteristics, temperament, and appearance of a breed and ensures that the breed is fit for function with soundness essential.  The breed standard for the Finnish Lapphund can be found here.